All meetings will be in the Great Baddow Village Hall until further notice.

Great Baddow is a large village, just East of Chelmsford and contiguous with it. It is most simply approached from the junction of the A414 East with the A12. Turning towards Chelmsford, it is about one and a quarter miles from the A12.

How do I get there?

Do you want to go straight to the Maps?

Or read the directions first?

If you are coming up the A12 from the South, do be careful to ignore the first junction signed to the A414. This takes you in the wrong direction (you could end up in Harlow! or a busy part of Chelmsford). Please, carry on northward until you come to Junction 18 where the A414 comes in from the East (from Danbury and Maldon).

Leave the A12 at Junction 18 (on the Chelmsford by-pass) and take the road in the direction of Chelmsford. This used to be numbered A414 (and is marked as such on the map below), but has been renumbered to something unmemorable! If you approach from the North, you negotiate two roundabouts: fourth exit from the first roundabout which takes you West over the A12 to the second roundabout. Here you take the first real exit from the second roundabout. If you approach from the South, you negotiate just one roundabout, taking the first exit which goes West towards Chelmsford.

Travel this road, passing first into the 40mph zone, followed by the 30mph zone. This is shortly followed by a roundabout where you take the second exit. This is followed almost immediately by another roundabout where you get into the left-hand lane at the first exit. This lane takes you to Great Baddow along "Maldon Road". If you get in the right hand lane, you will be onto the dual carriageway (A1114, used to be A130) and you won't get off it until you reach the "Army and Navy" roundabout in Chelmsford and then you will either have to double back or take to the instructions below for "Coming Through Chelmsford".

Follow Maldon Road for less than a quarter of a mile, where the road starts to go down-hill. Slow down, because you are going to turn left just as the view opens out to reveal the Vineyard Shopping Centre and Car Park on your left. Turn left into "The Causeway" and then right into the car park. Park over near the main road (Maldon Road), because the Village Hall is directly opposite, on the other side of Maldon Road.

If you are bringing equipment, try to park in the lay-by which is just down-hill from, and on the same side as, the hall. If fully occupied, park temporarily at the foot of the steps leading up into the hall and move your car when unloaded and your equipment is in secure hands.

Come by way of Princes Drive or Parkway to the "Army and Navy" roundabout (avoid the flyover) and take the "Baddow Road" exit signed to Great Baddow. Follow this road, straight on at the mini-roundabout, ignoring Beehive Lane to your right. Go straight on, to the fork in the road where you take the left turn and go up "Maldon Road". Almost immediately the Vineyard Shopping Centre is on your right and you turn right into "The Causeway", then right again into the car park. Park over near the main road (Maldon Road), because the Village Hall is directly opposite, on the other side of Maldon Road.

If you are bringing equipment, try to park in the lay-by which is just down-hill from, and on the same side as, the hall. If fully occupied, park temporarily at the foot of the steps leading up into the hall and move your car when unloaded and your equipment is in secure hands.

By Way of the A414 from Maldon

Head along the A414 in the general direction of Chelmsford until you come to the junction with the A12. Then follow the instructions above in the section headed: "By Way of the A414 from the A12".

This is the shopper's car park and is suitably large. At 7:30pm there should be few shoppers and plenty of choice of spaces. There is a pedestrian access to Maldon Road without going back out onto The Causeway.

The above is an area map covering the A12 to Great Baddow. Please note that the road marked as A414 in the above map has a new unmemorable number. The road to the right of the junction on the A12 (below the letters "DISTR") is the section of the A414 which goes eastward.

Below is a map of local roads from the last roundabout on the A414. You should be following the green line.

If you like aerial views, you may compare this one with the map above. 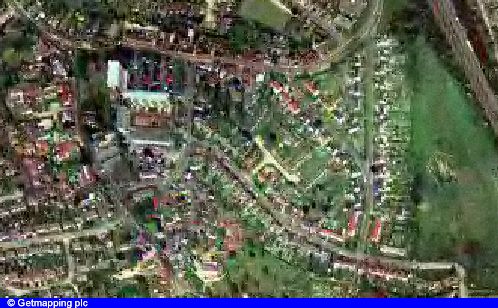 From Chelmsford rail station, there is no doubt a bus service to Great Baddow. Its number? Its frequency? Do you catch it directly outside the station? Or across the road, under the bridge, and into the bus station? Don't know. Ask at the bus stop!

For contact details, go to the "Contacts" button at the foot of this page.